The whole comment thing is a dead end now. Everyone knows it’s just a spam magnet.

I think that millions of people would disagree with this statement. I come from WordPress/com, and for sure, comments are not a dead-end thing there, because it’s an essential feature for building a community.

I agree. Having tried out a few other CMSs, I say that WP/CP is still more of a blogging software than a real CMS. I wouldn’t recommend it for a website that has many pages, because that will be very hard to manage.

it’s an essential feature for building a community

Just to be clear, we are not talking about removing comments entirely. Just that if you do want comments you have to put one tick in one box. That’s it.

WP/CP is still more of a blogging software

This whole debate is a red herring for 2 reasons.

If you will notice, I just reacted to the statements I quoted. I’m not arguing for or against your petition.

Of course, I know that you’re not talking about removing comments entirely, but saying that comments are a dead-end thing as an argument for your petition is a hasty generalization.

And as to what I said about CP being more than a blogging tool than a real CMS, I simply agreed with what joyously said, and I meant WP/CP’s design, function, usability, etc compared to other CMSs. I was not talking about blogging or comments at all.

I don’t understand arguments over nuances about what a CMS is. WP and CP are systems that manage content. So they are CMSs by definition. Some of you might argue that others do it differently or better, but that’s irrelevant to this point.

As a CMS, having comments on by default is bizarre. We should actually have everything possible off by default, so the site owner can then turn on what they need. That’s really the whole basis of the idea of core plugins. So this petition gets my vote.

OK. I’m starting to get a feeling of support on this one. I have a PR ready to go so will submit it and see where it goes from there.

Thanks for comments everyone.

I’ll add a bit more perspective. There is a petition with decent support to remove the commenting system from the core into a core plugin. That should be the ultimate goal, I think.

That should be the ultimate goal, I think.

I’m fine with that as an ultimate goal. I just see this an an “interim measure”.

Also I assume that would be in v2 and it may be that some users prefer/need to stay with v1?

would be in v2

No, that will be in later versions. Some work was done on core plugins, but not on the commenting system. Core plugins for v2 are still up in the air for now.

What if there were one more question on the installation page

I agree with Joy on this. If we disable comments by default, we need to give users an ability to enable them during installation process.

@anon71687268 how hard would it be to include a checkbox to enable comments on the installation screen? Something like this: 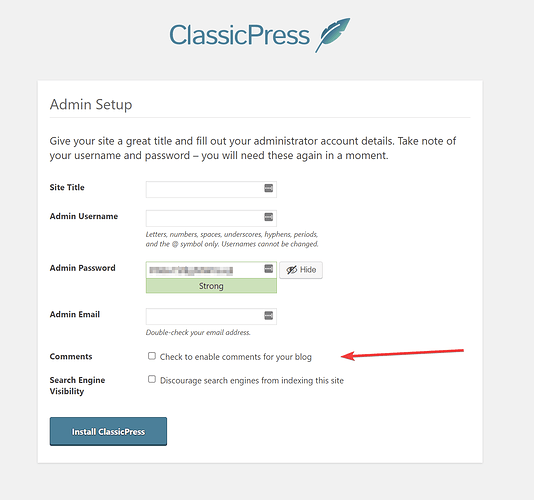 I haven’t looked at that code in 3 years.

It was a mishmash of PHP/HTML and it wreaked havoc on my IDE and it wasn’t fun code to work on. And, IIRC, there were no tests for that code, so, it took a whole lot of tedious manual testing, thoughts, and prayers to get it done. I’m sure it wouldn’t be a huge effort, if someone wanted to take it on.

If we disable comments by default, we need to give users an ability to enable them during installation process.

Sorry, I’m not understanding why. What’s the difference between ticking a box on installation, and ticking it later in settings? There are a whole heap of other settings that need to be configured as well. Membership, file upload arrangements, homepage settings, the week starting day, etc. Why is this one different?

Or is there something else that happens on setup that relates to comments being enabled?

I’m not understanding why

This is different behavior from WordPress. But I can be wrong, just my 2 cents.

That’s fine - always happy to get 2c from you. I have actually submitted the PR now so I guess the debate will continue over there. I don’t mind at all if someone wants to add that step into the installation process but @anon71687268 isn’t exactly doing the hard-sell on taking on the job.

## Description This changes a setting that gets loaded into the database when… CP initially installs, so that comments are turned **off** by default, not **on**. ## Motivation and context The comment system is something that users should _choose_ to use, rather than have it forced on them and have to remember to disable it. We no longer have Akismet as an included plugin, so we are currently enabling comments by default but not providing any way to deal with the mountains of spam this will generate. There is also the issue that comments can be enabled on media items by accident, even though the user is not even using posts or a blog. A user can therefore end up with thousands of images that are unintentionally made open to comments (and spam). Full discussion is here: https://forums.classicpress.net/t/change-basic-settings-of-comment-options/2744 This has a lot of votes from the previous petition system (note there is also a duplicate petition). ## How has this been tested? The change shown was made to one line in schema.php. A new CP instance was installed and it was noted that the box was now unticked. ## Screenshots ### Before ![before](https://user-images.githubusercontent.com/46998578/132933632-232ca8e9-b8c9-432f-a0d8-18f8e4ea0103.jpg) ### After ![after](https://user-images.githubusercontent.com/46998578/132933646-a4687152-964d-4740-8967-24affb5f41b7.jpg) ## Types of changes New feature I guess (although I'd consider it more of a bug fix).

So, I did a thing

I wanted to see if I can do it and it looks like I was able to add a checkbox to the installation screen and it works. Checking the box enables comments, leaving it empty keeps comments disabled. I followed search engine visibility checkbox and its implementation.

Changes to wp-admin/install.php and wp-admin/includes/upgrade.php. Do make the change to schema.php file to close comments by default. Hopefully, an actual expert can confirm if it’s right. Note, I didn’t add @param to the comments.

This file has been truncated. show original

This file has been truncated. show original

It’s 3am here. I wouldn’t be surprised if I’m dreaming.

I agree it makes sense to disable comments by default for new installations.

I don’t see the need to add a new checkbox to the installation screen for this. I don’t think it’s important enough to justify requiring people to make yet another decision before getting the site up and running.

(On a separate topic, I would also say the same for the “Allow search engines to index this site” checkbox during installation, because I don’t know a great reason for this to appear during installation either, but that one has already been there for years.)

This is different behavior from WordPress.

IMO, we need to embrace things like this, rather than trying to mold everything after WordPress and The WordPress Way.

Yes, v2 and up. Version 1 is supposed to be drop-in replacement. Adding new stuff doesn’t change existing behavior, but modifying existing features does. That deviates from “instantly familiar” tagline.

I would argue that “instantly familiar” is not the same as “exactly identical.”

I never said we shouldn’t make changes. We just need to be careful makings changes to v1 and ensure we’re not confusing or frustrating users.

I know. Of course, it can’t be ignored that those who have been confused and frustrated are the ones wondering why comments are enabled by default.