WordPress’s admin console is a rat’s nest of complexity, especially when lots of plugins are added.

A while back I was reading https://deliciousbrains.com/craft-cms-self-hosted-wordpress-alternatives/ where they showed a screenshot of CraftCMS’ settings page and I feel in love with it. I thought "Wouldn’t it be great if WordPress’ dashboard (or settings page) could be reconfigured to use categorized icons for core features and features added by plugins rather than the bloated wild-wild-west of the WordPress admin menus? 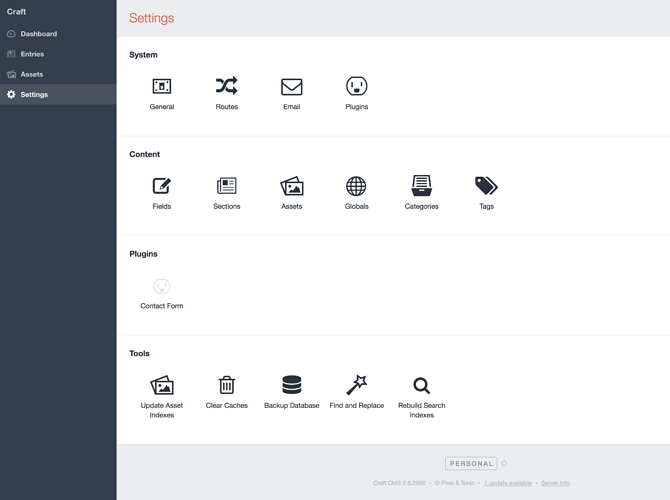 I could envision plugins that don’t specify an icon or a category could get listed at the bottom or we could maintain a JSON file on GitHub with categorization for well-know plugins, and then also allow plugins to actively register their own icons and categories if they wanted to explicitly support ClassicPress.

Anyway, posting here hoping that others will get excited about the same.

When I was getting started with PHP back in the *nuke days, that’s exactly how it was – icons. I loved it. I saw that DB writeup, as well, and wondered when things had moved away from that. Figured I just must be getting old. lol. Upvote.

Love this. this would fit the https://petitions.classicpress.net/posts/91/redesign-admin-ui-in-a-comprehensive-way-that-addresses-the-needs-of-business-site-users

I feel the admin UI needs a redesign, but I’m not sure this is the way. It reminds me of those horrible Gutenberg boxes, full of icons with bad spacing… It probably needs a more extensive approach, that includes some kind of simplification of processes managing the app. It will also depend on how CP moves away from WP.

One of the reasons I’ve stuck with WP instead of going to other CMS options is the lack of reliance on icons. I think text menus are quicker and better suited for people not using these pages every day. All the icons feel overwhelming. I know “feel” isn’t something lots of people appreciate, but it’s how a lot of us regular users evaluate these things. I guess if ClassicPress wants to go down a path to become a specialized CMS option then it could work, but for regular users like me, it would just make it feel more complex than it needs to be (which is exactly why I’m unhappy about the WP block editor). Forgive me if I’m doing this wrong! I’ve never commented on something like this before.

@Lynn - Thanks for the comment, and it is great input. And yes, with your comment you did it right.

Question: Maybe we can meet both needs? My reason for wanting this is not so much the icons but better and more logical organization of administration options.

Currently in WordPress there is no rhyme or reason as to where plugins put their options; sometimes under settings, sometime under tools, and sometime under Posts. But often they create their own menu for branding purposes and then sites with a large number of plugins can have 20 or 30 main admin menus. And I am constantly wasting time trying to track down where a plugin installed its menus because they almost never include a link to their settings from the plugin page. (If you are a plugin developer and are reading this, please of please add a link to your settings page from the plugin page.)

IWO, I am trying to tease our the essence of preferences here so we can envision as solution that most people will prefer rather than just the more vocal ones like me.

@Mike Schinkel I think grouping the settings is an excellent idea or finding a way to force settings link to appear in the plugin list (where you activate and deactivate). I’ve never really thought about that too much because I use so few plugins on any of about 10 installs now, down from 40ish at one time. But I have noticed that issue myself. Personally, having the admin of a plugin in Tools feels kind of silly. A plugin is a plugin, not a tool.

My thought is really about the icons instead of text menus. I agree with Alvaro Gois dos Santos above. It feels like WP is all about making WP into a mobile app these days and the icons are reminiscent of that. So not a good feeling there, for sure. Text menus are useful and more intuitive if they’re laid out logically.

So having the text default and the icon view an option could be a setting per user in admin or a setting per general. Either would make some sense. Definitely would over-complicate things to have a mix of icon pages of links and text menus of other links. One or the other is my suggestion. Not a mishmash.

Has my vote! However it is “just” a UI change and i would prefer implementing functionality changes first

~ posted by Peter B

It seems that allowing administrators an ability to modify the UI in a way that makes sense to their own workflow would be best. For one, most probably agree that having a plugin author throw a colorized icon in your top-level menu can be annoying. The ability to organize and even ‘hide’ some less used functionality in a drawer would be nice.

What do people think about this today?

cPanel also had a similar UI in its previous version, which could inspire CP UI. 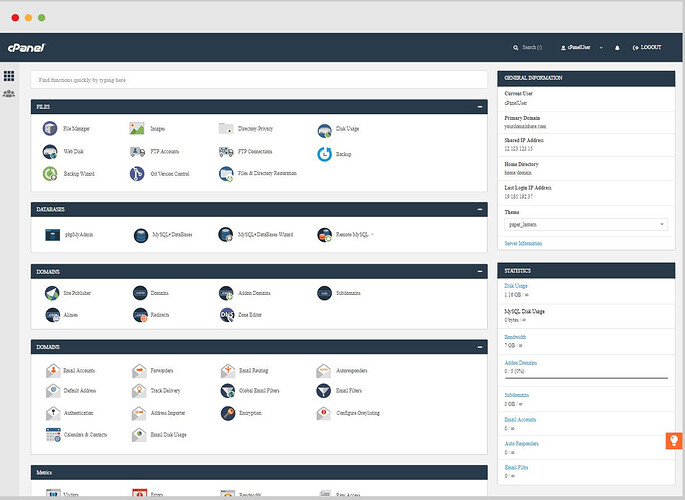 Now they released a new theme without icons, which I like less.

Combinig words + icons is in my opinion the best thing for both new users and users who already know their way around the UI.

We are getting off-topic, but I feel that you need some answers, and so I’ll try.

what I see in CP now that I have been active in the forums for some time is that there are a lot of ideas, but only few things (the documentation, and some minor tweaks?) are making progress.

You know why. Lack of manpower and resources.

But as someone pointed out in another recent thread, much progress has been done lately in the project, though those changes aren’t flashy or major, like the progress in the docs and translations. Nevertheless, these “small” progress are important and shouldn’t be overlooked or taken for granted. They make the platform more stable and more reliable.

there is a lack of organization in the roadmap

Perhaps. But given our lack of resources, and given the fact that the small number of devs that we have are all unpaid volunteers, I think that such a roadmap (a “wishlist”, as someone described it) is the best we can do.

If the project starts hiring developers, then we’ll have the right to expect a much better projection of progress. Meanwhile, let us all just be thankful and grateful that the project is still moving forward!

On my side, I wanted to help with Plugin Directory for CP-Next, but still don’t know what is going on with the API. Why is it different? Why in fact make a breaking change there? Can I help changing the API structure? Where?

You’re not the only one wondering what’s happening. I think that with the willingness you’ve shown to contribute, you deserve at least prompt answers to your questions.

About TinyMCE. What is going on?

I haven’t been following the progress of this research plugin, but as I understand it, Joyously is simply trying to make TinyMCE V5 working in the current version of ClassicPress, adapting it to the core. However, there is a lot of tweaks and testing to be done, and so that is taking time.

Honestly, as I see it, trying to introduce a new feature there is, as Joyously said, “out of scope.”

I reviewed the petition — there is no barrier. Others have shared their thoughts, but you are free to do what you want. As James said,

The problem with this - as I see it, at least - is that TinyMCE v4 is what is available to the whole ClassicPress community today. So by far the quickest path available to get this working and available to everyone is to make it work with v4. Still, if you want to keep this working only on v5, then that’s fine.

You must understand. Some of us care much about the stability of the platform. Personally, I want this kind of stability to support my works for decades to come.

I think the array of icons looks nice, but I’m not sure if it’s actually very functional. For example, in the screenshot, Plugins and Email are included under System. I’m not sure I’d expect that. And then Globals is under Content; I’d definitely not expect that (though I can see why it’s there now that I know that it is).

So my view is that, if someone wants to build this as a sort of alternative dashboard that users could opt for, then that would be fine with me. But I think it should start out as a plugin if for no other reason than it would be good to see if we can get agreement as to (a) what the different categories should be and (b) into which category each item fits.

Because plugins can call any function and use whatever filters and actions are provided, you can’t really prevent them putting menu items or icons or styles for anything the author wants. At least in the WP repo, they can say they won’t host your plugin if you don’t follow their guidelines, but for CP, that doesn’t apply.

I was going to use cPanel as the opposite example, since I can’t ever find anything in there and I typically try to find a skin that has no icons.
I used to use a popular theme with an extensive settings page, but quit when the author put an icon on every little field. It was so cluttered I couldn’t find anything (and nothing had moved).

I have fought with the design team at WP about adding more icons. Some people claim that it is good for dyslexia and newer users. I don’t know if there’s been research on that or if it’s just the younger crowd that is used to icons talking.

There is a task in the WP docs team to recategorize the user docs. It’s been going for more than a year and I don’t know that they have new categories. We all think differently, so categories don’t make universal sense. I once proposed to the WP plugin team to categorize plugins based on the existing admin menu, but that didn’t go over well either.

The thing is that the admin menu represents all the actions you can take. Categories seem to be more about objects.
I prefer the verbs to the nouns, but that could be that I’m used to it. But I don’t remember ever being lost in the admin or wondering where the link is (except that one time they changed some Appearance links to go straight to Customizer).

This is my summary for not supporting this petition for core inclusion. But it could be a plugin.

The easiest way to start this would be to write a plugin that uses the existing admin menu structure, but presents it all on the “main page” of the dashboard as categories + icons.

One challenge is that currently, each category (or top-level admin menu item) has an icon, but the individual sub-items under that category do not have icons. So this plugin would have to come up with a way to assign icons to all of the second-level menu items in each category.

If anyone is interested in working on this (or some other approach to this petition that makes sense to you), let me know and I can set you up a repository under ClassicPress-research.

Any chance the bump bot can be disabled? Topics are there to be found if you look around.

Agreed! It’s getting both annoying and farcical.