If we continue to push this project along, at the end, do you think we would have a better editor than v4?

If we’re not getting a better editor in the end, there’s no reason to continue this project. If the end product will be an improvement over v4, then we can figure out the details to get this moving.

I don’t want this project to die simply because we didn’t make the decisions that needed to be made.

Frankly, you’re probably the only person who can make an informed decision on this project. So if you think this will not end with an improved editor, we should put a stop to it and move on.

At the end, do you think we would have a better editor than v4?

Tiny v5 is way better than v4. Tiny is a huge company, they wouldn’t go and release a new version with less quality. Only looking at the design, you can feel the difference between 2004 and 2022: 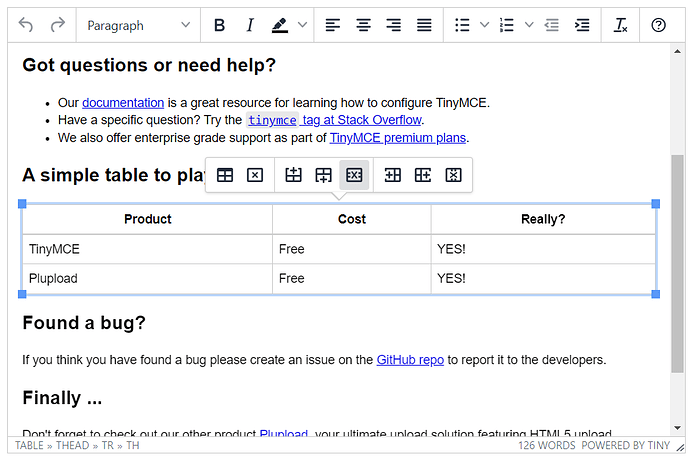 Btw, it has a dark theme too:

Yes, they added some premium features which are not required for it to function, and I don’t see anything in the current CP editor that would require a premium feature.

It doesn’t have to be Tiny though, and if we decide to follow a roadmap anywhere close to what I proposed here, this could still wait.

I like this one: ContentTools. Simple, original, practical, 100% free and easy to extend. But yeah, saying it just for reference and inspiration.

do you think we would have a better editor than v4?

No, I don’t. Despite what alvaro says, the changes I’ve seen are just rewrites, not improvements. And looking at the list of issues, they made a lot of mistakes doing it.
The change in the design is minor, but also obnoxious because they renamed everything. Both v4 and v5 use skins, so you could already make it look like whatever you wanted. But v5 doesn’t allow you to add a custom class name to your custom button, so you can’t even style it like in v4. I already opened issues that I found with their dark skin, although the one I have in the plugin fixes those.

If we’re not getting a better editor in the end, there’s no reason to continue this project.

I said this in the beginning.

you’re probably the only person who can make an informed decision on this project.

Not true, and I don’t want the responsibility. I have documented my thinking and research on all the issues. There are some code details I didn’t write down, but other folks can follow along and figure out what to do. I mentioned it on the WP ticket for the upgrade and got one person looking, but that was it.