I’m making progress with the CP Next version I started and all is cool so far. Removed XML-RPC, Pingbacks/Trackbacks, Link Manager and updated the schema to not include the wp_links table and replaced Gravatar with a Core Plugin for local avatars (allows custom and autogenerated avatars). I am now taking away deprecated functions…

AND I had an idea… to be more cautious with what I remove and what I don’t. The idea is to know what the community has to say about the most commonly used WP Plugins, so that I can install them and see how far they work along with the breaking changes I am introducing and also how difficult it would be to alter those plugins to make them work in the CP Next version I am working on.

Having 10 or 15 active common plugins while working on Trimming/Cleaning/Reorganizing Core seems a good idea to me. But not just random plugins… so that’s why I’m asking this!

I installed the most epic plugin in the ecosystem, which is Classic Commerce, and it works like a charm. (Big shoutout to the CC devs, it’s quite amazing!)

It would be cool if you answer to this topic with the name of the plugin, a very brief one-sentence description and maybe even a github URL if there is and why you believe it’s an important plugin for the ecosystem.

To me, the most important plugin, by far, is Query Monitor.

Query Monitor 3.8.2 is working perfect too. Great suggestion btw @timkaye, thanks. I’ll keep it active while doing stuff and analyze the worth of a potential breaking change when it fails. But yeah the things I’m removing are very specific old rests in Core. I doubt that any up-to-date plugin uses 'em anyway. And if it does, there must be a simple solution for it. Let’s see.

Actually, Query Monitor failed on the frontend because it calls the is_trackback() function which I removed together with pingbacks. It took me 15 seconds to remove that function call from the plugin and all is cool, which leads me to this idea.

Anyway, I’m open to lookup for more plugins and work with them. Even do the necessary adaptations regarding “breaking changes” (which should actually be called “subtle update changes”).

One rather simple plugin that would make for a great core feature is the ability to duplicate posts. I use plugin, but it should be a core feature.

Another thing that core should do is allow SVG uploads. One way to mitigate security issues would be to add SVG sanitizer to remove potentially harmful stuff. First thing I do on every website is add a plugin to allow SVGs, so I can use them in design.

I doubt @anon98749105 wants the plugin because it’s block-ready. Shortcodes were an integral part of building a WP website, and still is an integral part of CP since CP doesn’t have blocks. They offer a lot of features that users can utilize without coding. 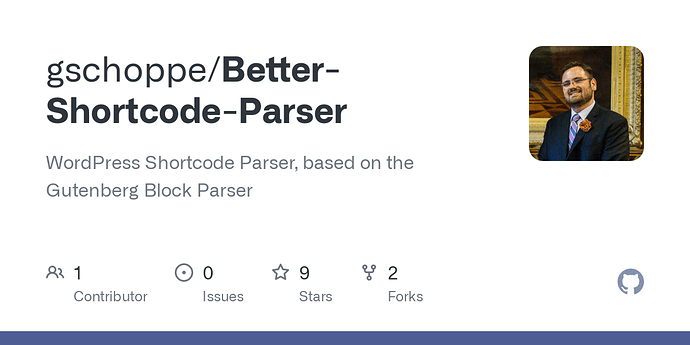