Why not use Discourse forum with petitions category?

requiring Docker. My sysadmin will have this setup in the next day or so.

No rush, and like @james said we are happy to set it up on our servers

Thanks. I will let you know if we run into any problems.

Thanks @james for reminding me about this discussion - I had a vague idea it had been mentioned before. Should’ve searched harder.

So, my problem with the separate petitions area is that (for me) it is out of sight, out of mind. It’s a separate login process and I don’t find the voting process to be at all intuitive.

I’m still happy to do manual data entry/cleanup if that is necessary for moving it.

Regardless of whether petitions are on a separate subdomain or in the forums themselves (my preference would be forums, but I understand there is not really a clear consensus on people’s preferences and that there is quite a bit of work involved with that), would it be possible to add more of a hierarchical structure to it?
When creating a new petition, there is a functionality that points you to similar posts, but there are still some “duplicates” with different nuance on the same topic. To me, it makes more sense to have a “topic” and then have nuanced options listed below for people to upvote their preferred solution.
But the problem is more with voting on petitions than with creating them.
Expecting someone to sit and scroll through dozens (hundreds? not sure) of individual random petition threads can be a bit much, since people are busy with other stuff on CP and outside. It just isn’t very user-friendly.

My personal suggestion would be to use it as an opportunity to evaluate the structure for user documentation. See if it is possible to make it as intuitive as possible.

And perhaps something like a widget with two icons and two lines about how to upvote vs comment to make it easier to understand how to contribute.

My other concern is that I don’t really regard the petitions as a space for a discussion on principles.
I would prefer to hash out the principles first with an open discussion (pre-draft) and having a petition as a more formal proposal after there has been some consultation on the topic so that it can be formulated more clearly with more stakeholder views considered.

I agree with @ozfiddler in that one of the main problems for me is that the petitions are essentially hidden. I also feel that having to create an entirely new and unrelated account is potentially a deterrent. All-in-all, the petitions area feels completely separate to what the CP community is striving to achieve here on the forums. This impression was perhaps exemplified by the “Petition dropbox for more space” request I saw the other day (now removed).

I also think the word “petition” is a bit odd. Personally, I would much prefer “feature request” as I think more people will be familiar with that terminology and it sounds less political.

As for petition / request submissions, maybe there could be a simple form set up so that all new petitions follow the same format e.g. topic area, brief description, existing problem, perceived benefits, etc.

For those who haven’t noticed, Wade has done some css magic on the petitions page. The “voting” arrows are now bigger and clearer (and use CP colouring). But, more importantly, once you vote it becomes a down arrow to indicate that it is now to be used for “un-voting” your selection.

To me this feels much clearer, more intuitive and easier to understand. So that part of my previous criticism I feel has been resolved. 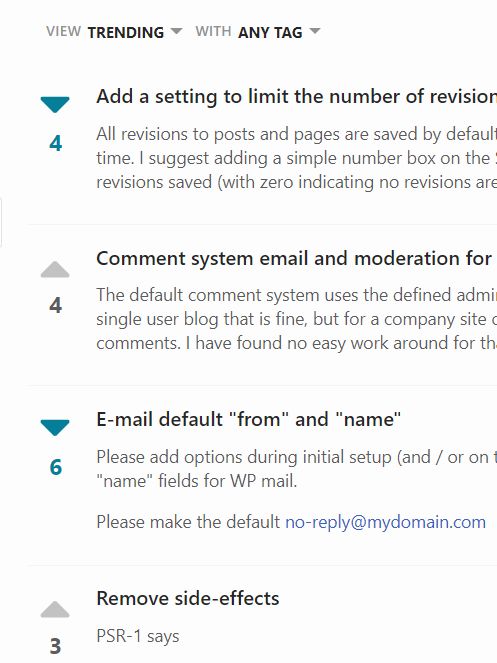 That reminds me to go vote on some of the new ones! Thanks @ozfiddler!