I am fine with persistent(but yes on the plugins page), this blog is 15 years old and sports 34 plugins: 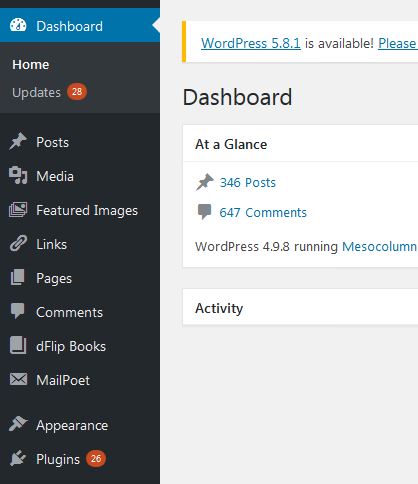 One thing I will add to this, plugin notices should be limited to the plugins page, especially if it concerns the updates.

But plugin update notices are not currently limited to the plugins page. We need to have some way to show it elsewhere, because users could easily go for months between visiting the plugins page. Updates required are actually shown universally, so maybe we should tap into this method.

users could easily go for months between visiting the plugins page

If you add a notice to the dashboard, make it dismissiable. Then show something on the plugins page that’s a bit more permanent. Ideally, for the specific plugin and not just a general notice. Similar to update notice with a version number that plugins show when they have updates.

If they are ready to update plugins, they visit plugins page and see the notices.

Yes, but there has to be a way to make them “ready”. Which means some indication outside of the plugin page.

The main point of this petition is that people currently don’t know there is an update available. There is zero indication anywhere. So we need to tell them somehow… somewhere.

A secondary point is that is they do update there is a chance that the plugin will break something or stop working. So it would be good to also inform/warn them of that. What we are really saying is “You might need to start looking for a different plugin”.

I get the point, I just don’t like notices on the dashboard page or global notices. Especially if they are not dismissable.

Here is an alternative approach. If there is a plugin that has moved to WP5+ an update dot is placed on the side menu in the usual way. I think these are undismissable?

Then when you go to the plugins page to see what needs doing you get a warning shown on the plugin, where the usual update message would normally be.

Yes, that’s exactly what I meant. I like it.

An email could also be sent to the admin email address when an update is available, like what happens when core updates are automatically applied. I think there is also a separate email for when a core update is available but could not be automatically applied. Of course this isn’t enough by itself because WP/CP sites are often not configured correctly for sending emails.

I haven’t thought about this deeply, but it makes sense to me to do all of the following. The first 2 are ideas from others in this thread:

This will also need to be tested on multisite since plugin management works a bit differently there.

doesn’t this happen already if there are plugins that need to be updated?

Not when they move to WP5+. We are talking about plugins that don’t appear to need updating at all.

It’s important to note that even if we do show updates are possible, there is no way to actually do the update. You would need to download the latest version and install it manually. And that might break your site.

Could the red warnings on the plugins page have a link to a doc explaining how to update? IE download and install manually.

Could the red warnings on the plugins page have a link to a doc explaining how to update?

Yes, that would be a good idea. That page could also explain the possible risks and consequences.

I’m happy to go with whatever people decide. But note, this is way too complicated for me to implement. I was really pleased I got as far as I did.

An email could also be sent to the admin email address…

This was my thought too and I have now implemented this in my own utility plugin as part of the update notification cron job that runs daily.

Take a look at this function, it helps modify plugin update notification.

Fires at the end of the update message container in each row of the plugins list table.

If plugins don’t get the update notice, we could insert something after plugin’s row:

Fires after each specific row in the Plugins list table.

That second hook was added in WP 5.5 for the plugin auto-update stuff. That’s also where they added the version checking functions.
Don’t you still need to adjust the version info that is sent to the WP API, so that it will tell you about an update? This is the change I proposed there, although I didn’t write a ticket.

Oh, OK, I think I understand now. Are you saying that instead of going to the trouble of running checks with continuous calls back to the WP repo to get the “requires” tag for each plugin, we instead bypass the mechanism that WP uses to say “Version 4.9? OK, no updates for you!”?

Isn’t that what the code already does?

Yes, that’s the problem. We want it to say “Version 4.9? I’ll still show you updates anyway”.

So you have to fool the WP API into telling you anyway, which means you change the info that you send, to indicate you are running WP latest, right?

Yes. That would mean updates would show up as normal, and then we just need to adjust the update message on the plugins page.

That would even let you go ahead and perform the update (with suitable warnings, at your own risk, etc).