There are many petitions about removing various features into ‘Core Plugins’. And, that should be done with: Customizer, REST-API, XML-RPC, Comments, Links… This will make maintenance easier, and CP core lighter.

But, the main thing related to the Core Plugins would be an extra step during the CP installation - when everything is set up (database, language and admin account), a new screen will be presented to select core plugins to install.

Also, the Plugins menu should be expanded to show the Core Plugins page where the Core plugins can be installed and removed, and not to be mixed with other Plugins.

Uhm … why open a petition for something that already IS going to happen? o.O
I’d rather add this - or the secondary part - as a github issue or a forum entry.

Core Plugins are going to happen, but I wasn’t aware that there will be install screen for them during install or in the Plugins menu. Can you point me to the Git issue or forum entry about that?

That is why I suggested adding the latter part as a github issue. Be aware that this clashes with the famous (?) goal of the “one step” install that everyone seems to be looking forward to (not me; I only see disadvantages).

I misunderstood you at first, I will open a new GitHub issue for this.

Realistically, it was never ‘one step’ install, because it has 3 screens (language, database, admin). To keep to these 3, maybe include a checkbox on the last screen to show core plugins installation if needed. It would be better to call it ‘easy install’, ‘one step install’ is just misleading.

And, installation is a good place to sort other things too, especially Multisite installation that is unnecessarily complicated at the moment.

Also, all this is way to early, we need the ClassicPress Plugins Repository first and Core Plugins need to be there for all this to be even discussed, so that is why I added it to petitions first.

But, the main thing related to the Core Plugins would be an extra step during the CP installation - when everything is set up (database, language and admin account), a new screen will be presented to select core plugins to install.

Personally I had a slightly different idea for this. I think at first, the expected core plugins would be included with the ClassicPress download package, and installed and activated by default. This would preserve compatibility with WP, which is important because most people won’t know about the dependencies that regular WP plugins will have on some of our core plugins. Then people would be able to disable & delete the core plugins as desired.

We could also build a tool that allows you to download a customized version of ClassicPress that includes some/all/none of the core plugins.

I think I still prefer this approach to adding extra steps during the installation process, but as you said, we have a lot of other things to figure out before we’re ready to tackle the specifics of how this works.

For users switching to the ClassicPress using the Migration plugin, all core plugins should be installed to maintain compatibility with WordPress installation that is being upgraded. And, manual download for clean installation should be lighter package without any core plugins. I wouldn’t go so far to have a download builder for a customized version, but there are a lot of things that can be done, all would be better than WordPress right now bundled with a lot of things that have no need to be in the core.

I had always assumed that the core plugins would be decided upon during install.

I think it would be OK to show a user a screen where they can choose a “custom install”. Software always gives me this choice when I install it, many times I just scroll through the choices and go with the default.

It also seems good to offer different packages to download.

But, I don’t know if a package with plugins that aren’t used will be any lighter on the front end or not, since I am just a “user”.

This petition will be closed, but you can track progress on core plugins in the Github: 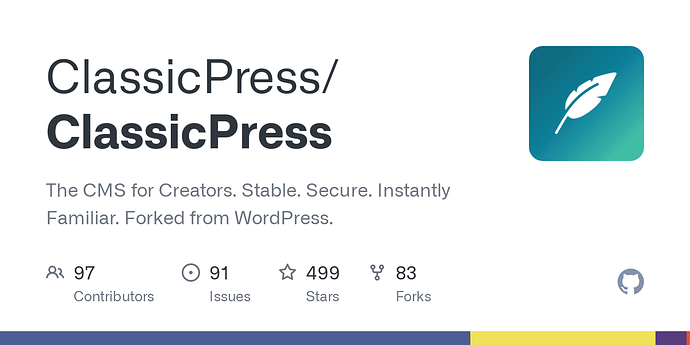