Hosting companies have been given 2 months notice that cPanel will no longer be charging a flat $15/m fee, but a tiered model.

For a small web host with 300 accounts as an example, their fee will change from $15/m to $85/m, a 500% increase. Needless to say, someone has to bear that cost. Commonsense suggests it will need to be the customer - you and me!

Plesk is owned by the same parent company, so the same will probably happen if a hosting company is thinking about changing from cPanel to Plesk.

This is corporate greed at its best. Take a product that virtually all hosting companies use, from large to budget ones like my host, and kick them in the guts, knowing there’s not much they can do about it.

This could, and probably will, affect you soon.

Yes, I’ve seen this discussed elsewhere. It will be interesting to see the effect it has on hosting costs. It certainly is a whopping price hike for many of the small to medium players.

I paid for either 2 or 3 years upfront with my host. Bet they’re not too pleased with this change.

Yep, first thing that came to my mind - pay for multiple years now.

But this increase may force small hosting companies to the wall and to shutdown. You have then probably lost your money. They won’t refund it pro-rata.

There are alternatives to cPanel available and I feel like many of them actually provide a better system for somebidyblike myself.

I use webmin/virtualmin and I’m pretty happy with it. It’s not as locked down (which personally I like) as cPanel.

Plesk is owned by the same parent company, so the same will probably happen if a hosting company is thinking about changing from cPanel to Plesk.

Plesk is already using this model, except the 20 cents / domain over 100 domains.
Price here

Yes the price increase hasn’t hit Plesk yet. But people think it eventually will, since it is owned by the same company.

I have seen Webmin mentioned as a possibly viable alternative.

Hey, don’t shoot the messenger. I knew nothing about this until I got an email from my hosting company this morning.

Here is part of what they said:

As you might have already heard from other providers or in the news that cPanel is changing the way they sell their license, and increasing the price significantly, we (and all other web hosting providers as a whole) are inevitably forced to make changes to our web hosting services and plans, especially on the Reseller and Managed cPanel VPS.

This is terrible news for us as it totally destroyed our business model of providing very affordable web hosting. Thus its inevitable for us and many others to make changes or we will not be able to sustain when the new pricing is billed. The worst thing is that we only have 2 months notice before the new pricing will take effect.

We are still considering several options as of now, which is using a different panel (but Plesk is not an option since its also owned by the parent company of cPanel) or increasing price.

People also talking about Direct Admin as an alternative. But really, cPanel is such an entrenched institution I can’t see them making much of a dent.

I think that the companies who consider alternative admin panels will probably base their decision on a fear for future price increases, rather than a current increase.

If they think that rapidly escalating prices are likely, they may be more inclined to retrain their staff and help their clients through the worst pains of migrating to something new.

As a DreamHost user, I’m all like, “What’s all the fuss?”

Well … cPanel is actually quite decent, compared with Plesk / Confixx. Its a shame its been destroyed like this.

I paid for either 2 or 3 years upfront with my host. Bet they’re not too pleased with this change.

For a shared account it won’t matter much, the prince increase to the host will be around USD 10-15c per month. But for Reseller hosting this will sink hosts left right and centre. Unmanaged VPS and dedicated servers with WHM/cPanel will also become debt traps.

DirectAdmin and InterWorx will be the big winners from this. DirectAdmin has already started preparing for their cPanel refugees, not sure about IW but I’d expect both of them to the thrilled.

My host has already suspended new reseller accounts. They are also saying there will be a minor price increase for existing customers.

But more importantly, they will be limiting the number of cPanel accounts you can host, and applying it retrospectively.

Hostmantis have already dropped their reseller accounts from 50 down to 10 meaning a 500% increase in fees for existing customers.

I just went to order a new reseller account from a company I have been talking to for 3 days and the price had changed from $6.30/m to $16.20/m in the last 2 hours.

This is certainly not something hosting companies are prepared to absorb. It is going to make creating new sites a lot more expensive.

I confirmed with Liquid Web there will be no change to the pricing structure. I’ve used them since 2008 and yes they are pricey but you get what you pay for with hosting and I’ve never had a problem with them.

I’ve got 8 or 9 VPS accounts there for myself and clients.

Looks to me like this was a targeted increase towards those companies that offer the really cheap hosting and unlimited reseller plans.

Hostmantis have already dropped their reseller accounts from 50 down to 10 meaning a 500% increase in fees for existing customers.

Hostmantis acted way too soon. They should have (my opinion) thought about moving to a new control panel instead of raising costs for all existing accounts. It’s difficult to see how they can possibly serve their existing customers on cPanel, particularly as they offer up to triennial billing cycles, meaning that some customers will have up to two years or more pre-paid by the time they get hit by the cPanel change. IMO the only way to keep those customers without going into massive debt is to migrate them to another control panel - even if it’s Plesk (yes Plesk and cPanel are both owned by Oakley Capital, but there’s no reason it can’t be used short-term to mitigate damages). With that said it’s not their fault, they panicked and have tried to act quickly in response to give their customers as much notice as possible … however as I’ve mentioned on WHT I think the better response is to send out notifications this week to customers, and to start planning, but not to act yet.

A lot of hosts are already writing off the option of using Plesk, I think that’s a mistake especially for resellers, probably the best possible solution is to offer reseller customers the choice of Plesk, DirectAdmin, or InterWorx in the short term. Rack911 are doing a security audit of the other panels currently available (CyberPanel, VestaCP, CentOS Web Panel, APNSCP, WiseCP, User/Webmin, ISPConfig, and ClusterCS) which will be done over the next four weeks with the results published for everyone’s consideration. Their present advice is that DirectAdmin and InterWorx are both at a security level similar to Plesk and cPanel and so are safe to use (or at least as safe as Plesk and cPanel, nothing is 100% safe ever).

This security audit is actually great news for everyone thinking of managing their own VPS or for those who already do their own LAMP stack as it will provide very valuable advise as to which of the low-cost and free panels are safest.

Thank you for pointing out the audit being run. Interested to see the outcome

This says it all 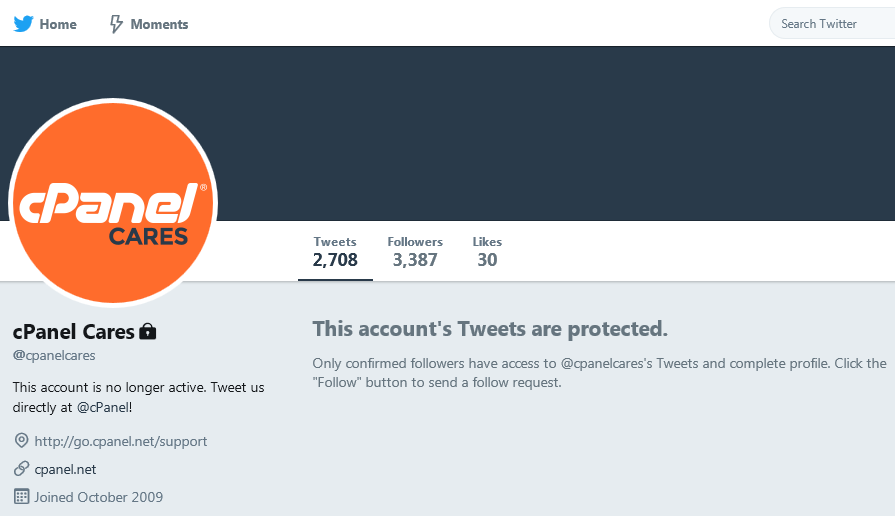