How many CP installs?

There has been a pretty good-sized boost in the past week or so, we are up to 1700 now!

For a new project, I’d say it isn’t bad, but the aim has to be for continual increase.

We need to continue getting the word out that there is an alternative to WordPress which doesn’t require learning something entirely new and which does not contain Gutenberg.

I’ve currently got 13 of my own and clients’ sites running on ClassicPress (+ another one under development). Only 4 + a test site still on Wordpress.

I would be interested to be able to see that number somewhere like they do for Wordpress plugins.

I’m not on board yet and with the release of the ACF block field, and how to manipulate blocks without learning React, I’m even more hesitant since the number of installs is pretty low.

I’ve played around with the ACF block plugin field and how it was used to create those blocks in that 2nd plugin with PHP and it totally made sense to me since PHP is what I know. I pretty much use ACF Pro on most of the sites I build anyway and my biggest concern with Guten was those fields breaking.

Don’t get me wrong, Guten is still a crappy page editor and I would never use it to build pages.

From a business standpoint I have to decide where to go and knowing that there are lot of installs for Classic Press would make me more comfortable in switching. Right now 1500 installs is not enough to inspire confidence in me that this fork has legs.

If it does not have legs, then I need to be learning how to work with what I know will be around for a while.

Here is a link to the article about the ACF field in interested: 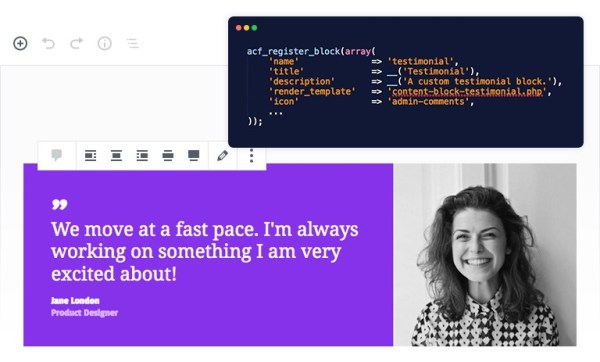 I’ll continue watching what Classic Press is doing and still may yet go that way if the adoption rate is much higher.

13 posts were merged into an existing topic: About ClassicPress being business-focused

I had seen that article. But, as you’ll have noticed in the comments, Elliott Condon makes it clear that there’s only one person who worked on ACF Blocks: him.

Obviously, everyone has to judge for him- or herself which risks are most problematic for their own usage, but that’s a huge red flag to me. What happens if he gets ill or loses interest? And how’s he going to cope when menus and widgets become blocks too?

To me, relying on one developer is a much bigger risk than moving to a platform with 1700 installs.

Agreed, each person has accept their own level of risk.

Just my opinion, I’m not writing off Classic Press just yet, but I pay my mortgage with Wordpress and if I need to learn Blocks to continue paying my mortgage, then that’s what I’ll do.

Which is why I would be interested in seeing somewhere on-line the official number of installs being used. There are 1700 now, but six months from now if there are only a few hundred more, this fork will remain a niche item.

That may not be a great strategy if you are coming late to the party. With c.57,000 plugins already out there, it may be more sensible to go where the users will be.

That’s tons. You should look at the numbers of active installs of some password managers that have been around for a lot longer than CP.

Your and my idea of tons differ.

There are over 75 million Wordpress sites in one form or another running.

If I’m a Plug-in developer, it’s not rocket science to figure out where I’ll make more money.

I’ve loaded Classic Press and liked it and I want Classic Press to succeed but I’m also a realist which is why I thought having a public number of installs posted somewhere so people can watch it’s progress would be a good idea.

At some point I’ve got to make a decision as to whether to fully embrace Classic Press and put my future in it’s hands, or embrace Gutenberg and just roll with it as so many others have done.

I’m sure I’m not the only developer who feels this way.

Considering we only started in August we have made great progress. I think this is a matter of “already” not “only” 1700 sites.

Regarding a public number, we agree. Copying @james’s reply from earlier:

Currently in order to calculate these numbers you’d need access to the ClassicPress server logs, which isn’t something we can share publicly. However, we’re working on an automated process to publish a graph of active sites over time.

I agree that established plugin developers might not be bothered about CP if they are already making good money from WP. But it’s a very congested market, as anyone who ever tried searching for a plugin will know. For the smaller players it would seem to make really good sense to support CP. - it requires no extra work really. If the plugin works with WP4.9 it will work with CP. And you would have the chance to pick up a possible 1700 more users.

Not ONLY 1700 potential users, but DEDICATED users. That’s very much different than WP users, where there no longer appears to be a sense of community and helping each other out, as there is with the CP community

Not ONLY 1700 potential users, but DEDICATED users.

That’s exactly right Dick, As soon as a plugin dev commits to CP, that plugin will become the one that all CP users will head for. It seems obvious to me that devs should be getting in early on this. Nothing to lose and a lot to gain.

A post was split to a new topic: Marketing Update: May 2019

I’ve actually lost count of how many CP sites I have now … not because there’s a lot, but because I’ve forgotten to keep track.

It is certainly 4 with another 3 in active development, and another new one this week. I think that means we have ½%!

When we can (rebuilds etc.), we’ll move other clients over. Currently we’re using Padma Unlimited and ElementorPro with ClssicPress.

All discussion related to the ClassicPress tagline and slogan have been moved to this topic: About ClassicPress being business-focused

The committee hears everyone’s input and truly appreciates everyone who took the time to voice their opinions. We are considering next steps and will keep you all updated over on that thread

James - can you provide an update on how many installs CP now has, please? Thanks!