Users should have an ability to use SMTP easily if they choose to. No reason to have multiple plugins for something basic.

Has my vote, this is one of the most common things I set up on new sites.

However, it probably won’t be straightforward to decide which settings and providers get included here by default.

I wouldn’t include anyone by default, unless it’s really needed. Just provide input fields to connect to SMTP provider. A link to documentation where we can list common providers and examples could suffice too.

I support this too - it is the first thing I do now on every new site.

This is a no brainer. Agree!

Definitely need for SMTP as standard. At the same time though, there are battle-tested plugins that do this really well - including a lot of features that CP probably won’t have time to develop - as it’s not the main focus. Simply bundling a plugin like this could be good alternative to having to integrate this in core:
Post SMTP Mailer/Email Log – WordPress plugin | WordPress.org
(I pick this one because unlike similar plugins, this one has connectivity and diagnostic tests, supports common APIs also, and now has SMTP option fallback included.)

Copy/pasting from my comment on https://petitions.classicpress.net/posts/173/bundle-advanced-editor-plugin because the same logic applies here:

There are a number of “middle-ground” approaches we could take here. A few examples:

This is a very bad idea in terms of security exploits, and a surefire way to make web hosts think twice before supporting ClassicPress. Many comments on this site are not taking into account the dynamics of the industry…

Sending mail should not be the responsibility of a Core CMS, its something that should be configured higher up the stack, and by conscious decision (e.g. decided by whoever installed or manages the server itself). Even PHP does not support sending mail by default; this is by design.

There’s also the point that SMTP is pretty old school at this point, and a great way to get your TLD domain blacklisted by databases like Spamhaus. This is why modern email APIs are taking over so rapidly, and they have (whitelist) delivery agreements with major email providers like Gmail, etc.

This feature would add code bloat AND major security concerns.

While there are simple ways to add SMTP functionality for sending emails in WP and CP by using the phpmailer_init hook (as already discussed), I’m curious about the response from Jesse.

While PHP have mail() and WP has wp_mail() and even though this would not be a core feature; how do you (Jesse) recommend this to be done on a server level and yet added to the CP core, so that those who want to utilize a SMTP / IMAP email feature can do so?

Not sure if I still want this added to the core. I did start using APIs to send emails. There’s also a plugin SMTP to handle that easily.

There’s also the point that SMTP is pretty old school at this point, and a great way to get your TLD domain blacklisted by databases like Spamhaus. This is why modern email APIs are taking over so rapidly, and they have (whitelist) delivery agreements with major email providers like Gmail, etc.

It’s an interesting point. It made me think. What if we integrated mail providers’ APIs as a core plugin, so users could easily pick their provider and enter their API details for CP to send emails? WHMCS did something like this. It looks something like this: 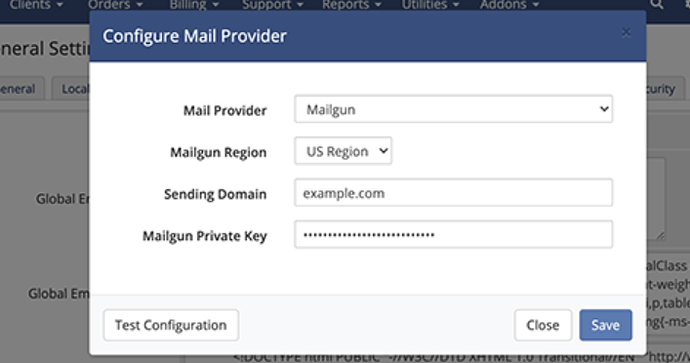 It’s also extensible, so developers can add new providers if they want to.

This is my petition. At this time it’s best to leave it up to plugins to provide SMTP integration. Petition will be closed.