Bitchute that is a new video hosting website, developed a new comments platform in order to get rid of Disqus that they used up until now.
They call it CommentFreely it is open source and it available on GitHub.

The Bitchute people are looking also for programmers to offer support forthe further development of this comment platform. 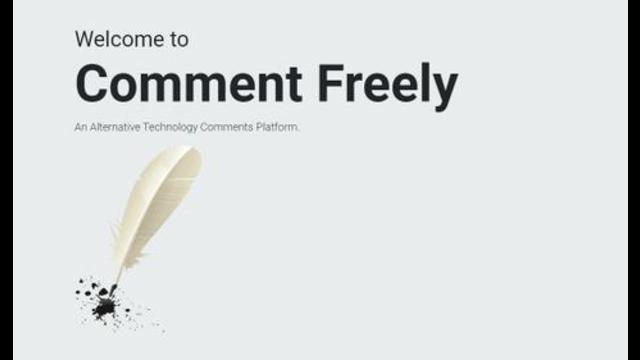 You can see how it looks like under the video as they have already launched this comment platform on their website.
According to what they say this comment platform is compatible with Disqus too - but not related- in order to migrate their use’s comments that they already had on Disqus, into the Comment Freely.

And here is my idea.
Why not modfy and use this comment platform as default on Classic Press. I mean replace the default WP comments with the Comment Freely that is somewhat more advanced as it has edit button, upvote option, new old and popular comments etc.

As I said Bitchute people are looking for support and if CP team works on the same project for the CP platform that will be beneficial for both teams. CP team can modify it as default comment platform unique on CP ( and for sure better than the default WP comments) and perhaps improve it further and Bitchute team can benefit from the developing and promote CP on their video channel, that is now the stronger competitor of youtube with some millions of subscribers.

In order to sum the whole thing up. The concept is to take their code, modify it for use as default comments for CP, contriute to the further development and improvement for the platform and advertise CP on Bitchute. ( swap the coding support with advertisement and promotion).

The comments on that video are less than complimentary; it seems there are fairly basic things it doesn’t currently do.

Additional discussion at Suggestion for a new comment platform... just an idea

Moving the discussion here now to the petition.

@azurecurve That is the reason why the Bitchute developers are looking for further support . But what they have done up until now, is an open source alternative to Disqus modified to work for their website. And this open source application ( or whatever is calle that) they say that they are able to load the comments from Disqus that they had it previously as the default comment platform of their video platform.

The developer’s decision that you are talking about was up until now the native WP comment platform that was in the core of WP from day one and we all had to deal with it as most of the alternatives were commercial.
If CP wants to be competitive it has to be different and better on whatever has to do with its core features. One of them is the default comment platform, as CP is a fork of WP and WP is mainly a blog cms.

So if CP wants to make the difference has to have core features that are way better than those or WP and also somewhat different.

The CommentFreely now, is a platform that the Bitchute guys developed it as a open source alternative of Disqus, because they wanted to get rid of Disqus that is not open source and it is censored but on the other hand is quite sophisticated as a comment platform.

Whatever are the individual features of CcmmentFreely which I think that someone can modify and customize it by the time that this is open source application, I think that it is full of potential.
Here is another idea for instance.
What if CP developed that comment platform for CP websites in a way that someone would be able to comment with a single account on all CP websites but that would also be something that each website admin could turn on and off? If your use CP for a website to have the comments for random visitors and if you use it for your blog to have comments for those who will come back to your blog to discuss instead of simply comment.

The idea is that if CP decides to make the difference on its core features it can add things that no other cms has and will be more sophisticated than those that WP had.

And to reply again to Azurecurve if something has completely basic things is the current comment platform that is the same for WP and CP.

I can’t tell either if it is better as it is under development. But the comments section has to get improved and change. The existing comment platform doesn’t work neither look good. It is …bliah…lol

The comments output can be highly customized. You can style them however you like. I’ve done this by adding code to a utility plugin.

@Code Potent If you know how to code.

I don’t. I’m a watercolourist not a web designer. And a lot of people are in the same position with me. I mean they don’t have the knowledge to modify that much their website’s code. They need something ready made to install it there to do what they need and also look nice.
Personally speaking I don’t touch anything that can break down my website. I have done very few modifications on the theme that I’m using and I paid someone to code for me the home page. I was lucky btw to pick up a versatile theme from the very beginning. It offers plenty of options so I don’t have to experiment when I want to change something.