The latest version of TablePress (1.10) has set its minimum WordPress version as 5.3, meaning that it is no longer ClassicPress-compatible.

I have reached out to the developer on the WP repo support page, asking if there are particular code changes that forced him to set that minimum version, and explaining that it prevents the plugin from being CP-compatible.

If he’s not able or willing to restore 4.9.x compatibility, then I’m willing to fork TablePress and its extensions, as it’s a plugin I find very useful.

I had a reply from the TablePress developer:

Yes, TablePress relies on changes in WordPress 5.3, like a simplified code and CSS structure. This allows me to greatly reduce complexity, because I would otherwise have to add version checks in several places. Also, it makes offering support more difficult, because of the variety of versions that I would have to test with.

For users who can’t or don’t want to use the newest versions of WordPress, I recommend to stick to the older versions of TablePress. As for ClassicPress, which I have never tried myself, you could also investigate using WordPress again, but with the “Classic Editor” plugin.

I’m not going to argue with his logic. However the most recent version of TablePress that works with WP 4.9.x now has a vulnerability discovered. It’s not likely to lead to millions of exploits but it’s there nevertheless: 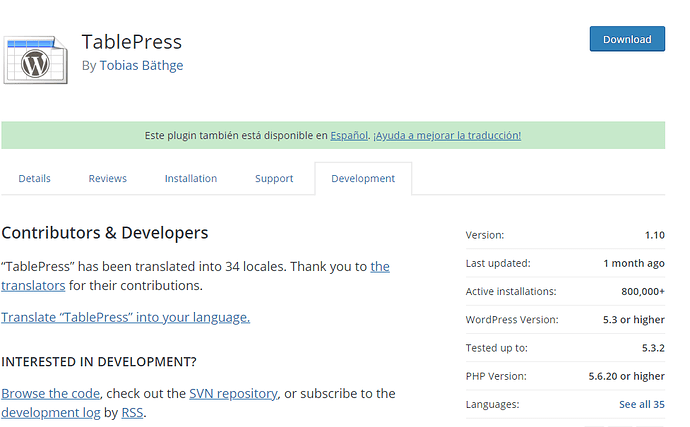 So although staying with TablePress 1.9.2 is safe for me (because I don’t use TablePress to import CSV, or allow my users to do so), it won’t be 100% safe for everyone.

So, I’m going to give consideration to the idea of forking it. It needs serious thought because it’s a large codebase and I don’t want to take on something that will try to take over my life.

I would be interested to know if other CP developers also use and like TablePress - please let me know.

As for ClassicPress, which I have never tried myself, you could also investigate using WordPress again, but with the “Classic Editor” plugin.

People always seem to misunderstand why we use ClassicPress instead of WP with the CE plugin. Shame. Like we didn’t investigate and determined it wasn’t for us.

People always seem to misunderstand why we use ClassicPress

Yeah, you’ll note I didn’t say I agreed with his logic, I just said I wouldn’t argue with it (because it would take too long!)

The developer has explained to me why the vulnerability is actually spurious (and I agree with him). It can only do anything if you export data from TablePress admin and import it into Excel. So that’s hardly a plugin problem and it’s not going to affect any websites. The person who publicised the “vulnerability” was being over-zealous and in my view irresponsible.

So we can use TablePress 1.9.2 with ClassicPress without issues, and I will postpone my option to fork it until there’s a different and genuine vulnerability or one of the extensions gets updated and breaks.

I have added a modified version 3.0.0 to cpforks.com

It is essentially a “re-badged” v1.9.2 that will work on CP, but has a filter preventing it from being installed on WP.

Awsomeness and speedy too!

Postscript: Digging around online, I see the dev is getting inquiries about using this plug-in on earlier versions of WP. Is there a way to let him know there’s a version available for the folks who don’t want to use the latest and greatest of WP but that there is one little hiccup, eg, the filter? He might appreciate being able to get them out of his hair as he indicates that he is trying to keep support requests minimal. I didn’t want to post at WP as I’ve already been banned twice over there for mentioning ClassicPress.

@easternwawoman Anyone on WP below the 5.3 will simply remain on v1.9.2. For someone who hasn’t installed it before, they can get it by downloading the earlier version on his plugin page.

My modifications are quick because they’re not actually changing anything functional. But I don’t wish to become a pseudo WP repository for old plugins

My site is for CP users who need plugins they know will work on our platform.

You missed my intent. It was to make a statement that subtly causes those users to consider moving to CP as there are still many who do not want to upgrade to latest v of WP but will eventually be forced to do so.

@easternwawoman luring them with plugins?
That may work.
Fed up of GB, and your plugin broke? C’mon over there, CP works like a charm, no GB and the plugins you love able to run on CP.
I do not know how and where it could be implemented however. Maybe just staying around in places like quora and sprinkling it here and there…

You missed my intent.

I hardly think offering a plugin that will never get updated is any sort of incentive?

@Aussie we do not know if the plugins will never be updated.
Also, we do not know if a company will ever think to hire a dev to maintain/further develop a plugin they are interested in, and we do not know if this is going to result in them deciding to release the maintained version to the public.
What I do when speaking about plugins in CP is telling people the options, and letting them know they can make the difference and help push cp forward just by being users and stating their needs, for where a need is someone can be willing to stepup for whatever reason (a dev can decide to code a similar plugin, or fork it, and sell it. Or he can decide to do that for free because he sees benefits in doing so).
We need to have users with needs.
This is an option to explain them that if many of them need something, CP is going to meet that need one way or the other.
The reason many people withold is “will CP meet my needs?”
My answer is “in time yes, if you express them by using it”
Obviously this means being very ear on what we have now, but also what they could ask if they make the plunge.

we do not know if the plugins will never be updated.

I meant it won’t be updated by me. I think the developer has made it pretty clear he is not going to either.

Certainly, someone else may fork it, but that is not the purpose of cpforks.com and is an entirely different scenario.

While it may be an opportune time to present the argument to move to CP, the WP plugin support forum is not the place to do that. I’ve been down that road and suffered the result, by having my account blocked.

We can only get converts by attraction, not by poking the WP forums with a stick. That just aggravates the hornets - and they sting back with a vengeance.

It’s actually one of my pro arguments for enticing folks to use CP over WP-with-Disable-Gutenberg/Classic-Editor. Much less stress involved than having to fear your system is going to have a bad hair day in the near future - or even worse: a WSOD.

What I do is advocating on various places. But never on WP platforms.
It’s like going to a grocery store to advertise your own grocery store.
But I answer and interact on places like quora, Reddit, quag, fb and others if I am asked. And presenting an active member of community that is at least doing a little something demonstrates CP willingness to grow.
CP is the sum of all the individual pushes. When asked generally I show that we have people here who drive the change.
And tell them that having them onboard will help in understanding what is needed.
But again, not on wp platforms. On this I agree.

What I do is advocating on various places. But never on WP platforms.

Same here. That’s why I do my part with sites like CP Forks and the ClassicPress Club. I also promote CP wherever I can on my hosting sites. We can only tell the story, not force it down their throats.

It’s interesting to me to be reminded of how we see the world so differently, which makes communicating more challenging. I’m swamped right now so I’ll be back later to explain.

For anyone who needs this capability, they might consider implementing DataTables directly (as TablePress is simply building on this to provide its own interface).
https://www.datatables.net/
Though I no longer have an example I can point to, I’ve done that (registering and enqueueing the script and css in the theme, although you can use the CDN scripts if you prefer) in combination with an ACF repeater field to allow editors to create table rows and cells without directly fooling with tables in the editor.

For anyone who needs this capability, they might consider implementing DataTables directly (as TablePress is simply building on this to provide its own interface).

Yes! THAT was the part I’ve been pondering about all the time - WHAT the name of the library was the TablePress developer has been using all along. Thanks mate!

Cause a few years ago I did half part of a project that involved developing custom, client-specific extensions for TablePress, where I essentially found out its mostly this: A nice wrapper with a bit of additional WP Admin UI magic around DataTables.

Hence my original reply to the starter post was, that I’d be happy to lend some help with this, because I’ve got actual experience with enhancing it - but I couldnt figure out the name of the library for the heck of it …