This is unrelated to core.
We can’t known all CPT a user is going to add, it is task of the person or code that adds said CPT to add this to the widget.

This is a candidate for a plugin, or code snippet.
Starting point might be a good one here functions - Displaying Custom Post Types In "At A Glance" Meta Box - WordPress Development Stack Exchange

Vote to close this as unactionable and also unnecessary task

And if I want to remove one of the 10 CPTS I have?

Unless this would allow with a setting to control each CPT, like any plugin that allows you to register CPT does already, I don’t agree that this should be in core.
We wold not only clutter said widget but also make it harder to control - as now I can add, but if Core adds for me, how to I remove? I would need a setting specified in core, which makes all current existing settings in plugins obsolete or would have to change from “ADD” to “REMOVE”

I was just leaving some notes in case it ended up getting the votes. I didn’t vote for it and don’t think it should go into core.

In actuality, I don’t ever use the At a Glance widget. I think of it more like the Just Barely a Glimpse widget.

Instead, I’ve concocted the Site Overview widget which displays much more site data (including my CPTs) and offers a lot of quick admin navigation. 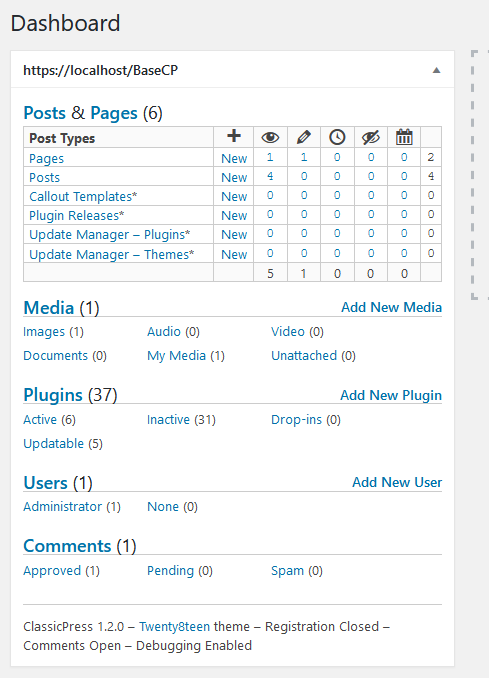 What would I do to remove the special CPT

So I’d have to make a cpt non Public just to not show it in the at a glance?

I’ll opt out of this.
If it’s gets implemented a filter should be added to remove this “feature”

The consensus is this isn’t needed. However, we do have another petition that aims up improve At a Glance widget.

Expand the "At a Glance" widget Petitions

Context Provide more useful information in the “At a Glance” dashboard widget. This suggestion is really targeted at developers who manage a number of sites. They often need to quickly know more than the average user. Edit: This could also be a candidate for the new snippet repository. Possible implementation My utility plugin extends the widget to tell me stuff that I really like to know “at a glance” when I go into the admin area of a site. This is an example (though I’m not suggesting we …