Default buttons/controls for the new editor

With the ClassicPress Editor project moving along, I’d like to get some community feedback on the default controls placed in the interface. Here’s an editor to play with – it’s got most features enabled and includes far more than we plan to include in the final editor.

It would be great if you could play with the editor and then post your feedback here. Anything that you love or hate about it; anything you’d change or do differently; your opinion counts. You can even suggest a thing or two that you’d like to see included in the new editor which are not present in the old editor. Let your voice be heard!

It's time to update the ClassicPress editor! And don't worry – we're not going to pull a Gutenberg on you!

I’m using my Android phone right now, and so I can’t yet play with it, but I’m glad that the Source Code < > button and window are still available.

I understand that the new editor might need to reimplement (simulate?) wpautop, but it would be great if this access to the HTML source code is left intact.

Awesome work on this!

Do we plan to do anything with TinyMCE templates? I assume not but thought I’ll ask. It’s a powerful feature, so if not the core, it definitely can be extended in a plugin.

Side note: All the dropdowns are very narrow, to the point that it shows 1 or 2 characters per line.

Side note: All the dropdowns are very narrow, to the point that it shows 1 or 2 characters per line.

Looks like I got a little aggressive with my CSS rules. All fixed.

I’m currently using the enriched editor on a lot of my sites and I had a look at why I felt I needed it. The main feature that I really, really want (and why I installed it on many sites) is to have tables.

I think if you have nothing else new included in this editor then you should at least include tables. Being able to quickly whip up a table is a basic part of any word processor and it’s really versatile for doing simple layout stuff. I’m just not sure whether there are any theme-related problems that may arise form this.

The second most useful thing I would say is the find and replace button. That is also a very basic feature that we have come to expect as standard and is super useful.

So those two features would get my vote for inclusion by default. There was also talk about having some more features included that could be enabled using a filter (which is a neat idea - not readily available to the average user but can be added by the site admin). Obviously we can’t include every feature or it will be way too bloated. But I do like the code button that displays code (both front and back end) using a syntax highlighter.

I should also mention that I do think it’s important to have some new features included and a new “look”. One of the most common complaints over the years about CP is “But you aren’t doing anything. There is no progress”. People need to see something happening or they think the project is dead.

I’m trying to install (bot from the zip provided and cloning the repo) but all I get is this.

What I’ve done wrong? It’s happening on my bloated staging site and on a fresh install on tastewp.com.
Thank you.

I just pulled the main branch and it’s working on this end. Maybe try a hard refresh to ensure you’re not being served any cached data. 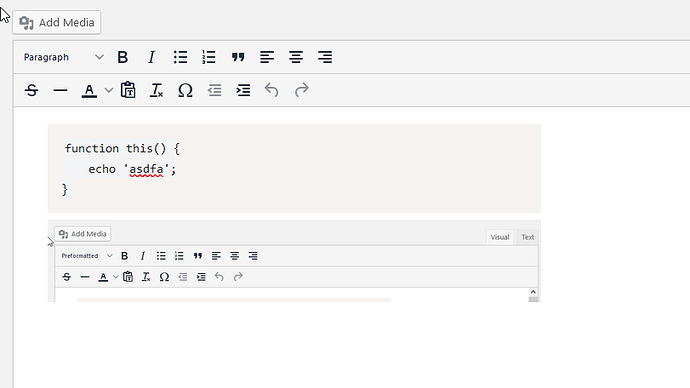 Solved using MAMP.
Thank you and… my plugin is starting integrating

Just tried it on a site with BeaverBuilder installed work as expected but if I try to edit in BB all editing facilities disappear.

This thread is for discussion of buttons and controls for the new editor.

Issues can be reported here.

Love it!
Paste as text toggle button and remove formatting are very useful and will help a lot with clients writing in word and pasting a ton of s**t!

Not closely related to this thread, but adding compatibility for one of my plugin vars, tiny5 branch has been pretty easy.

Discussion for this issue is here:

@Pross Hey Simon, we began experimenting with TinyMCE upgrade to v5 today. You can find a discussion here and then the experimental plugin here. Since I use BB exclusively in my projects I naturally wanted to test and see what happens. As expected there was an issue, the TinyMCE editor is gone from the text module. I created a GitHub issue to track this. [image] So I wanted to get this on your radar and see if BB would be willing to support TinyMCE v5 when it eventually ends up in the core. …

Both of these exist in the v4.x editor.

Being able to quickly whip up a table is a basic part of any word processor and it’s really versatile for doing simple layout stuff. I’m just not sure whether there are any theme-related problems that may arise form this.

Tables should only be used for presenting data, not for layout. They are very persnickety to style generically so that they look good on all window sizes. Usually if you have data to put into your post, you would have a plugin that generates it for you or you paste it in from some external source.
Most authors only think of whatever window size they personally use and forget about the rest.

These filters have been in core for a long time, so nothing to do there.

Why add a plugin if the editor is already able to handle ToC?

For the styling. The result with no styling looks weird (to me).

the word/character count in the bottom right corner is clickable to switch between word and character counts. Who actually knows that just by looking at it?

It looks like a link to me… The one we already use doesn’t give the option for character count, since that’s not as useful.

If I download and install this, will I still have all the basic functions of TinyMCE?

However, do note that this should not be installed on a production site.

Any idea when it may be ready for production sites?

There were a number of changes to the TinyMCE codebase from version 4.x to 5.x, so, much of the work is in converting/patching the old WP-specific TinyMCE plugins to work with the new editor code. Since the project is mostly JavaScript (and we’re mostly PHP programmers) there’s a fair amount of doc-surfing and trial-and-error involved. This does slow down progress to some degree, but, we are putting in the work.

Will settings for the editor made via your WYSIWYG plugin be retained? 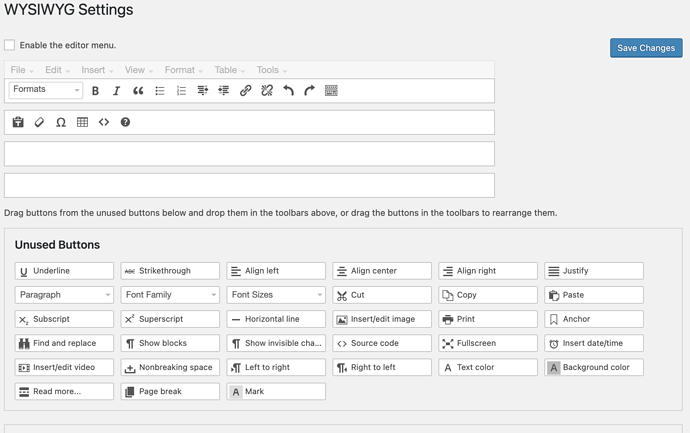 If someone opened an issue for it, I’m sure it could happen. The new editor probably won’t have all those features built-in, though. It will probably be similar to the current editor in functionality, and then someone will either have to port Enriched Editor to work with v5 or create a similar new plugin (both options are a fair amount of work.)

The better approach is to include everything in the new editor and give users a panel to add/remove features, just like Enriched Editor does. I’ve heard one concern that this will add to the download size of ClassicPress, but, other than that, I haven’t heard any other reasons to not include the extras.

I am strongly against updating the editor only to tell users that they have to install another plugin to get at any of the new features that came with the update. In order to get users to buy-in to the updated editor, we’d have to develop both (the core plugin and the extension plugin) simultaneously – otherwise updating would cost them all their WYSIWYG features. Nobody is going to go for that and it will make this project flop. The Enriched Editor was my most popular plugin when I was managing it, and I think it’s safe to say that the majority are using it.

It would be nice if each user could customize their own editor, similar to the option to disable visual editor completely.