Draft of the Plugin Directory Guidelines

The ClassicPress Plugin Directory is intended to be a safe one-stop source for all ClassicPress compatible plugins for all types of user, from the non-technical end-user to the developer.

The following rules are intended to provide transparency around the plugin submission process for developers who submit their plugins to the directory; further the rules aim to provide consistency and a level playing field for all developers.

If you have suggestions on improving the rules, or questions about them, please contact the plugin moderators at [email protected].

If you are uncertain whether a plugin might violate the rules, please contact the plugin moderators at [email protected].

Free/Freemium/Premium plugins are all welcome in the ClassicPress Plugin Directory, but must be identified as such by use of the appropriate tag. Software-as-a-Service must be categorised as a Premium plugin.

Only one that is tough at the moment is this one, everything else I think sounds good

Plugins may not contact external servers without explicit and authorized opt-in consent from the user. Documentation on how user data is collected and used must be included in the plugin’s readme along with a clearly stated privacy policy.

Point 4 could be extended…

Just this for me…

At present are we saying only free are allowed?

I can amend the rule to state this for now and it can always be added back if freemium/premium are then allowed.

Let me think about the phrasing of this. Plugins which connect to other services probably should state something in the readme (I’ll hold my hands up and say mine don’t).

I think Premium is okay, there is just currently no way to flag a plugin as premium in the directory.

I’ve amended for update servers and identification of freemium/premium.

I’m not sure if we need to update rule 4 for plugins which connect to services like Twitter?

Maybe something like “Plugins designed to integrate with third part services such as Twitter or SMTP are excluded from this rule as those services terms of service will be accepted by the user when they configure the integration.”?

Maybe even something easier (but non written so bad

)
“Plugins designed to integrate with third part services such as Twitter or SMTP are excluded from this rule as their main goal is clearly to connect with a remote service".

Plugins may not contact external servers without explicit and authorized opt-in consent from the user. Documentation on how user data is collected and used must be included in the plugin’s readme along with a clearly stated privacy policy.

To be honest, installing a plugin that says it will connect with Twitter/SMTP would to me be “explicit and authorized opt-in” and most times you will be required to add your login/authorize the plugin anyways. I think maybe saying for those plugins that do that they need to be super clear that is their primary function.

I’ve updated based on your and @Simone’s feedback.

I’ve added a new rule recommending the use of vendor prefixes.

Updated rule 14 to clarify what a stable release is).

But what is this definition?
So we can now use Github feature? Or still need to upload the Zip ourselves?
Is there a point I miss where we define how the GitHub release has to be created?

After discussion I’d describe recommended best practice for a release is to create a release on GitHb which includes a separate release zip with the required folder structure in the binaries section: 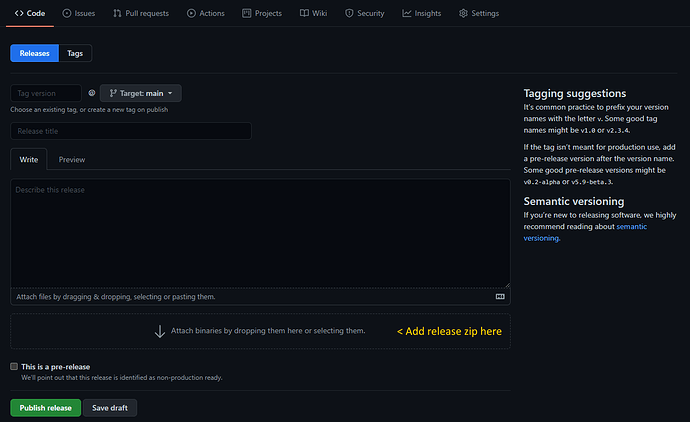 I did a final tweak to rule 14 based on the previous post, but, unless there are objections, I’d say these rules are finalised and ready for publishing.

@smileBeda the guidelines are ready to be published; is this something you can do as part of your current updates?

In the plugin main .php file and in the theme style.css file, NOT in the readme.txt files
Why?
Because all available WP/CP functions to actually get requirements of a or several themes/plugins do not read the readme.txt file. They read the stylesheet and the main plugin php file.

Thus, 99% of all themes and plugins, unless developed with much love, will all miss the requirements in the main plugin php or theme style file, even if they add it to the readme files (which is what the WP Repo traditionally reads).
And since they only care about passing the review, the information never gets added to the main files, and thus completely defies the purpose of said information other than what’s good for the WP Repo.
WP Plugin reviewers also do a nasty job here, because they only care for the readme file, and do not really check if the information corresponds to the respective style or main php file.

Thus I thought we could do better at CP.
(It is easier to add this requirement than adding a new scanner that scans a readme txt file.)

I should have more time next week and will revisit the guidedlines as I know there is some other feedback I’ve not responded to yet.

A post was split to a new topic: Git-php integration for plugins