Converted to BETA; when I click on INSTALLED PLUGINS, which successfully carried over all my plugins from the backup/upgrade, I don’t see any plugins in need of update, except the following:

It’s still “shaded” for “Upgrade”, even though a version check shows the following:

" You have the latest version of ClassicPress.

Not sure if that’s a bug, but thought I should point it out; could be (really) confusing to some folks who aren’t used to it.

The VERSION that’s currently showing is:

“Upgrade to ClassicPress” is the migration plugin now. When clicking it, it should say you have already been upgraded.

You’re right, it did say that I was already upgraded (I didn’t want to click it, for fear of messing something in the installation up)… it now says " Hey, good job, you’re already running ClassicPress!

You can delete this plugin now.

Just letting you know; could be confusing

Thanks! We will make a note of that and adjust the wording

Here’s one other thing I noticed… even after restarting CP and logging back in, PLUGINS still shows that there is one plugin in need of update (a little shaded 1 next to the word INSTALLED PLUGINS)… this is after I deactivated and then deleted the upgrade plugin…

In WP versions prior to this upgrade, the word “DELETED” showed when you check(ed) the number of plugins, active, etc. That no longer shows up, as indicated here:

Is it possible that we need the category/word DELETED back in there, so we can physically go and remove a plugin that might be causing that “1” to appear?

Could you confirm? If so, we will move discussion there so we can keep everything organized.

even after restarting CP and logging back in, PLUGINS still shows that there is one plugin in need of update

This is just what it says: a plugin that has an update available.

Switching to ClassicPress does not update your plugins.

I agree, BUT, when I open up PLUGINS, there is no plugin with an update available???

Can you post a screenshot of where you see an upgrade available? 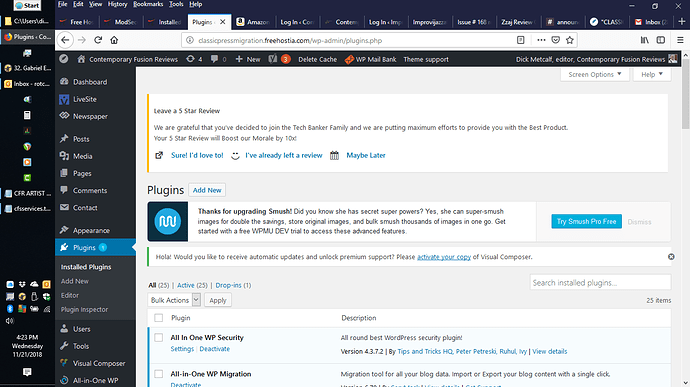 Not sure if this helps or not (hey, I’m trying), but when I installed ClassiPress using the github plugin download and installing the migration plugin that way it did show an update as soon as I installed it and went to Tools. Once I updated it, everything seems fine. I suppose ideally it’d be best if after installing the migration plugin it didn’t require an update but if that’s what it takes to get it going it’s obviously not a big deal. I think the perfect scenario would be to have security patches and updates done automatically once installed?

This is how I understood the issue, that there seemed to be an update for the plugin, not ClassicPress itself.

Dick: I think if you click “Dismiss” on the Smush notice then that will disappear.

Voltaire: Once we get to a “final release” version then updates should happen automatically including security releases.

We are also investigating several options to make the migration process smoother with less steps, including immediately jumping to the latest version. There are some technical reasons why this is a bit difficult - mainly that the ClassicPress release we use for the migration plugin needs to have a different file structure than the official release build.

Personally, I didn’t have any big issues with it. I installed the migration plugin as instructed, then looked around each section trying to find the settings or activation section for ClassicPress, which I found under Tools. Then I went to that, and I think that activated it if I recall correctly. Following that there was an update box or alert which I believe was for ClassicPress. That being said, I’ve used many plugins that worked in much the same way.

You were RIGHT ON the money… that fixed it; thanks!