I want to work on intgerating the Plugin Directory with CP via the API.

The first thing I have done is to try to reach out to the API from the native wp_remote_post function with a very simple example:

And I am getting the following error:

I expected that this would return the actual JSON, just like when directly accessing it via GET on the browser.

The default method of the HTTP Class is GET, so I don’t know what is causing the communication issue. Any hints?

Change vs No change the current plugin directory API
Does anyone want to work on ClassicPress v2 (with breaking changes)?
ClassicPress "Next" Progress News
Is there anything you would REMOVE at all from ClassicPress?
alvarofranz October 31, 2021, 12:07pm #2

Well, actually passing the $args array with method GET makes it work:

I wonder what goes on, since as far as I know the request method is GET by default. Anyway, will keep this topic open to keep track of Plugin Directory integration issues.

So yeah, integrating the API itself is not a complex task, but I have a question here. Would it not be better to make the API return data in a way that is as close as possible to how WP is currently doing it?

I mean, why change the returned structure and then adapt the core to that new structure?

Why not make the API return data in a way that is as close as possible (if not the same) as WP is currently doing it?

@wadestriebel is the best person to answer any questions about the API. He built the directory and the API.

Why don’t you use wp_remote_get? Then GET is indeed the default.

Changing the api at this point is suboptimal
While nothing is yet really implemented… amongst other things there’s a request to create shields for GitHub that is already sent to the folks making those, and while they don’t seem to have started on it, it would be bad changing this at such late point

I’m also not so sure that’d be without a considerable effort to redo the directory api at this point.

However Wade is the only who can really answer that particular detail, as Viktor mentioned

Changing the api at this point is suboptimal

I just wonder why the API has been implemented in a different way than the WP one. Making it spit out the same structure would have been more straight to the point, especially because things like the following wouldn’t require any change:

I will anyways wait for input by @wadestriebel - Already did some tests with the current API and it shouldn’t be too much drama to get that implemented.

As I’ve mentioned in other places, there is good reason to have the API the same (although a bit improved for versions) as WP, because there was a small change put into WP that is easily backported, that checks for Update URI in the plugin header. That means WP is already set to update a plugin from wherever it specifies, as long as it uses the same responses.
(This meta ticket is where they check that the header does not exist for the WP repo: #5747 (Block plugins using invalid `Update URI` headers) – Making WordPress.org)

Changing the api at this point is suboptimal

On the other hand, if the directory API needs to be changed, then the best time to do it is now.

It makes sense to me to make it match the WP version as closely as possible, so that the same codepath can be used.

I think it might be good to reuse code/design when adding the CP plugin and theme directory.
If you go into the Customizer and click on Change Theme, you get a screen like below. This provides the ability to choose which repository you want on the left and the list from that repository on the right. (I never used it on a phone, so I don’t know how that looks.)
This same design could be used for the plugin page and theme page outside of the Customizer, although it might make more sense to reduce the size of the list of repositories. They could be submenu items or part of the page. 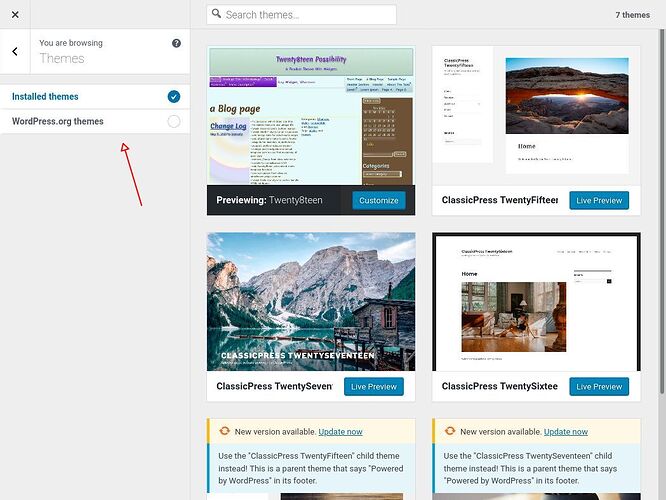 It makes sense to me to make it match the WP version as closely as possible, so that the same codepath can be used.

If we have an example of the way the API is returning the data we can change it, I think we had an issue somewhere to do that but I don’t think anyone ever got around to adding an example for me to use as a reference.

I wanted to follow up on directory integration because that’s one of the main things that can help people start using CP, especially ensuring plugins can easily update.

I spoke with @wadestriebel about the directory API and he said he can work on modifying data returned to match what CP expects.

@alvarofranz are you still interested in working on this?

1 Like
Plugin Review Process | Some issues I think we should fix and details to clarify transparently
alvarofranz April 14, 2022, 4:00pm #14

I spoke with @wadestriebel about the directory API and he said he can work on modifying data returned to match what CP expects.

What’s the current state on this? As soon as it’s ready I will work on the integration.

Give Wade a bit of time. He’s away dealing with a personal matter this week. But he did confirm he’ll work on it last week, when I asked.

So who’s responsible for reviewing plugins these days? I submitted one earlier this week and have heard nothing so far.

As for the plugin review process, all your plugins have been reviewed by now and you should have emails in the respective inboxes with some details.
Let’s keep the communication in said email.

The case of “plugins are not being reviewed” can be considered closed.

Does the API integration include anything to do with language packs?

Prior to WP 4.7, plugins had to call load_plugin_textdomain.

Since WP 4.7, the WP repo is integrated with GlotPress and plugins don’t have to do anything to load translations, although they can still bundle language files and load them.

I’m just wondering how that should work in CP.

Does the API integration include anything to do with language packs?

The API integration isn’t affected by that change. They made that be an optional step for plugins that are already installed and active on the site. But it doesn’t affect the plugin directory.