Unable to Switch to CP issue

I reviewed this thread https://forums.classicpress.net/t/classicpress-1-0-2-via-composer/1586

I attempted making the change in composor.json, but it didn’t work.

I should be able to switch to CP

The dashboard identifies 2 issues stopping the switch. Composor.json and WP5.2.4.

Here are a couple of screenshots to help. 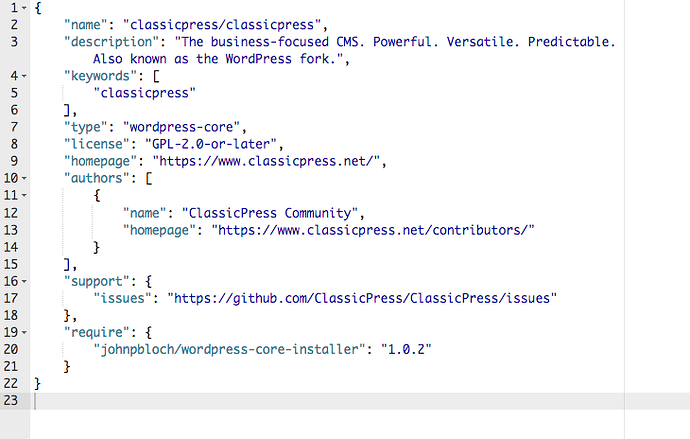 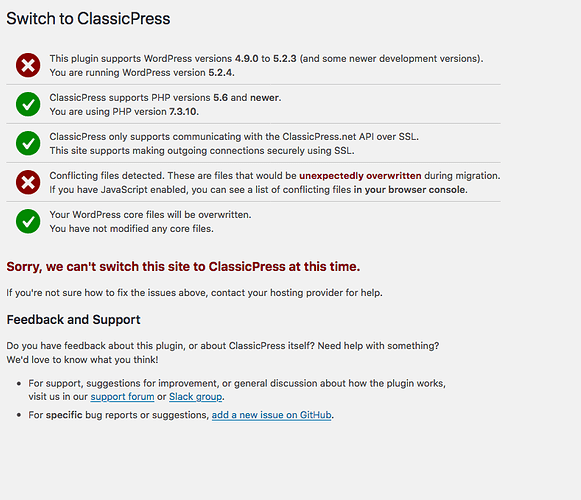 Is there a suggestion as how I can proceed with the switch? This is my test site. I’ve been communicating with Caldera Forms directly about Admin styles breaking with CP at Caldera v1.8.5 and wanted to give them access to the test site to experiment with.

Hi Leslie, thanks for reporting this.

I’ve confirmed that migrating from WordPress 5.2.4 works as intended, so I’ve enabled that for the migration plugin.

The composer.json issue is happening because ClassicPress was previously installed on this site, and that file gets “left over”. You can remove the composer.json file and this should let you proceed with the migration.

@james thank you for your help! Yes, you’re right about CP being installed before. I’ve been testing back and forth.

Great! I’ll update the Switch plugin and delete composer.json from the directory. I look forward to being able to report back on Caldera with good news at a future point.

Great! I’ll update the Switch plugin and delete composer.json from the directory.

I look forward to being able to report back on Caldera with good news at a future point.

As usual, you may have an easier time with their support team if you can demonstrate the issue on WP 4.9.x.

@james I can do that no problem. CF is usually pretty good with support.

The switch worked perfect with deleting composer.json and replacing the Switch plugin with the new version. I marked your response as the solution.