I have suggested that they state it officially at some point, because it is hard for ClassicPress community to know whether the compatibility is because the initial fork is near identical to WordPress or whether they would have fixed things if there was an issue.

Function available for newest update of Rank Math to move the metabox to the bottom of the admin screen (eg, below custom fields you may have added).
https://wordpress.org/support/topic/is-there-a-function-to-give-rank_math_metabox-a-lower-priority/#post-11172587

I just gave Rank Math a try this weekend and it seems pretty good but it’s definitely challenging to get everything “in the green”, so to speak…

That isn’t necessarily a bad thing. It means you have to work harder on your pages than with Yoast, so maybe the standards are higher.

That said, a lot of that stuff that gets the green light is just a rough guide and not always a necessity for good SEO.

I have Rank Math on my test site and will probably convert from Yoast on the live site.

Not quite…this is the comms I got from them

This sounds more like it’s compatible for now, rather than actually supporting ClassicPress.

If you think about it, I doubt many plugin developers would guarantee to always support Wordpress if changes happen that make it unfeasible so to do.

It’s not about guarantees; it’s about intent and perception of viability. Plugin devs will cater to markets they consider viable. WP represents a big market, so I think most plugin devs (unless they decide to throw in the towel or place their bet on CP’s just emerging market) will ask “How high?” when WP says “Jump!”

This sounds more like it’s compatible for now , rather than actually supporting ClassicPress.

We do not have any plans of dropping the support for WordPress 4.9.9 since we ourselves use Classic Editor on many of our web properties.

Do you intend this plugin to be supported for the WP fork, Classicpress, which is becoming a popular alternative to Wordpress for people who dislike the recent changes to WP?

8 posts were split to a new topic: Issues connecting to Rank Math account

I had a good response from RankMath when I joined their Facebook group and mentioned I was with CP: 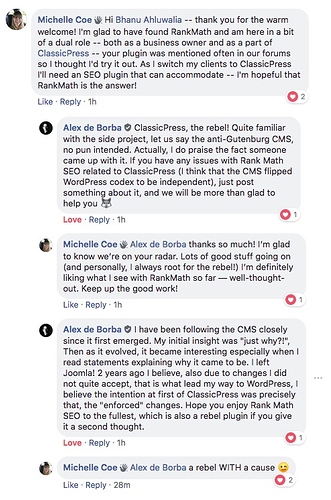 That does sound promising. I’m going to install it on a site and try it out.

I’m testing out SEO Framework. So far, so good–It was pretty easy to set up and–with the help of the SEO Data Transporter–it looks like my canonical URL settings have transferred. I like how the settings are all on one page instead of scattered all over the place. I’m told it doesn’t have the bloat of Yoast. SEO Framework also says that we’re allowed to modify the plugin for ClassicPress.

3 posts were split to a new topic: SEO Plugin Input

So I swapped out a client to Rank Math who originally had Yoast Premium and she immediately noticed (oops) so I contacted Yoast to find out if Premium would support WP 4.9.9. The answer from them is:

Yoast SEO Premium is only expected to work on the current WordPress version and the one before that. In this manner, that would be v5.1 and v5.0. This guide explains more: https://yoast.com/why-we-dont-support-old-wordpress-versions/

It’s a bit ironic that the blog post he references is from 2013, but whatever…

I’m not going to spend valuable support and development time on a minority that doesn’t want to upgrade, at the cost of not developing new features or fixing bugs for current versions of WordPress. So, if you want to use our plugins, stay current!

Really, that kind of attitude makes the decision so much easier.

It sure didn’t look like a minority in the support forums.

That attitude is precisely why I switched to CP. And now I see that it was right to switch from Yoast as well.

10 posts were split to a new topic: Rank Math Discussion