What is YOUR PERSONAL long-term view/expectation for ClassicPress

Do you use widgets for layouts?

Also, in the #core Slack channel a discussion has happened about doing a “meeting”/“discussion” about long-term vision.

Now, with new directors in and fresh collective motivation, with a new and independent plugins/themes directory calling at the CP door, as many voices as possible shall decide together the long-term vision for ClassicPress.

No need to discuss with others about details, just express your own view. Differences in views will show by themselves, no need to agree or disagree with others.

That way we can use all the voices to gather the generic feeling and use it as fuel for the discussion that will probably happen in Slack.

My personal view por ClassicPress is to stick to the roots and the name:

WordPress started as a normal CMS and has evolved over the years into an amazing CMS.

ClassicPress was born because WordPress reinvented itself into something new.

The essence of ClassicPress is: “stick to what was, and make it better”

So, my keypoint views are:

Details about the meaning of Core Plugins:

A Core Plugin is not about creating new plugins for ClassicPress. Core Plugin means: “take a piece of the Core, and convert it into a plugin, so that it can be enabled or disabled”.

Core Plugins will not affect performance in a negative way. Running a plugin or running core code is the same thing. It’s the same code running when you request a page. The only effect this may have on performance is positive, for those cases where a certain Core Plugin is disabled, since that specific code will not run.

A direct consequence of executing the Core Plugins project is, we will have to come up with a solution for Plugin Dependency which, in fact, has to be added to the Core, so that any plugin can rely on any Core Plugin and we can guarantee that nothing will break.

For me, CP as it is is pretty much perfect.
So, even if nobody ever adds new features that’d be fine for me. It does everything I need it to.

All I wish for is a focus on small updates to keep things modern and up to spec for the ongoing internet at large.

Imagine that would be just wat CP team is doing - That leaves a lot of time to finally set up a proper directory/hosting thing for plugins and themes and grow on that end - I think for the plugins that is being worked on already.

So keep it simple, keep it basic and stable and add support/improve for native plugins.

I completely agree with @arnandegans that, as far as I am concerned, Classic Press does not need any amazing new features. It needs to be dependably rock solid, and to keep up with changes in the online ecosystem (so it needs to grow in parallel with developments in php, and so on).

Core plugins sound like a good idea but, as Arnand suggested, “keep it simple, keep it basic, and keep it stable”!

Right, CP could be the “CentOS” of WP CMS’s - If you want to draw a loose comparison.

Any fancy new functions can be handled by plugins and doesn’t need to be in core as far as I’m concerned. That is the point of plugins after-all.

You could even argue that some features IN core right now could be moved to a plugin - Not sure what exactly, but you know, I’m sure some people would think so - Like post by email or xmlrpc and niche stuff like that. Though I have no such wish for now as as I stated before CP as it is is pretty much perfect right now.

That’s the core plugins concept. We just moved a list of them to GitHub: 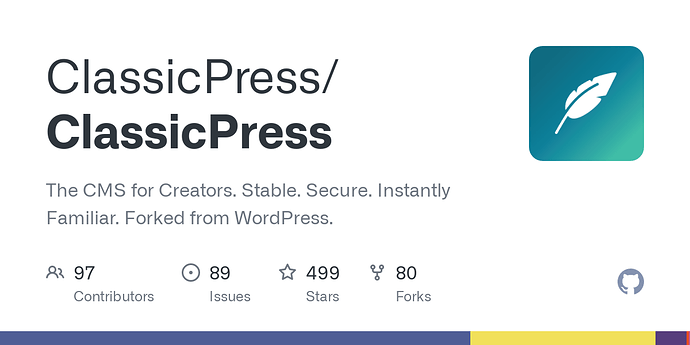